Carbon, nitrogen and phosphorus are three major elements that are important for all living beings. Circulation of these elements via biotic and abiotic components present in the ecosystems or environment is described by their biogeochemical cycles.  Carbon cycle explains the circulation of carbon elements through air, soil and water while the phosphorus cycle explains the behaviour of phosphorus through soil and living organisms. One of the important difference between carbon cycle and phosphorus cycle is that carbon mainly move thought the atmosphere while phosphorus does not interact with the atmosphere.

What is Carbon Cycle?

Carbon is the most abundant element on Earth. It is the main component of biological compounds as well as minerals. Carbon cycle describes the movement of carbon thought the planet. Carbon mainly cycles thought the atmosphere in the gaseous form. Carbon exists in the atmosphere as carbon dioxide gas (CO2). CO2is released to the atmosphere by many processes such as respiration, burning of fossil fuels, industrial emissions, microbial respiration and decomposition, etc. 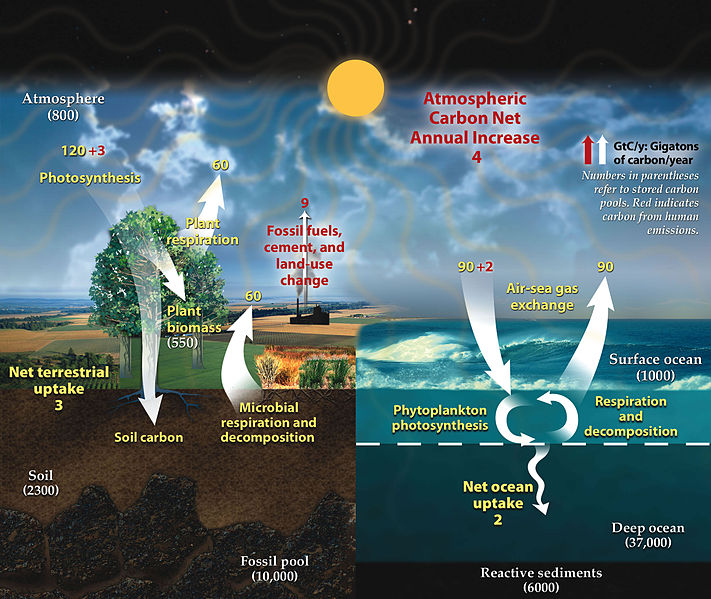 What is Phosphorus Cycle?

Phosphorus is a vital nutrient for plants. Since it is frequently deficient in the soil for crop production and is required by crops in relatively large amounts, it is classified as a major plant nutrient. Phosphorus can be found in water, soil and sediments cycling through them. Phosphorus is most commonly found in rock formations and ocean sediments.

Soil contains minerals that are rich in phosphorus. With time, these minerals are subjected to the weathering process and release plant accessible forms of phosphorus to the soil. However, once these plant accessible form of phosphorus is released to the soil, they become unavailable rapidly due to the fixation or precipitation process occurring in the soil. In acidic soil, inorganic P reacts with iron and aluminum and make insoluble compounds, while in basic soil, inorganic P reacts with calcium and magnesium and form insoluble complexes.

Mineralization is the microbial conversion of organic Phosphorus to H2PO4– or HPO42-, forms of plant-available orthophosphates. Mineralization rate is controlled by the physical and chemical factors of the overall microbial activity.  Immobilization occurs when these plant accessible forms of phosphorus are consumed by microbes, turning P into organic P forms. The microbial P will become available over time as they die. 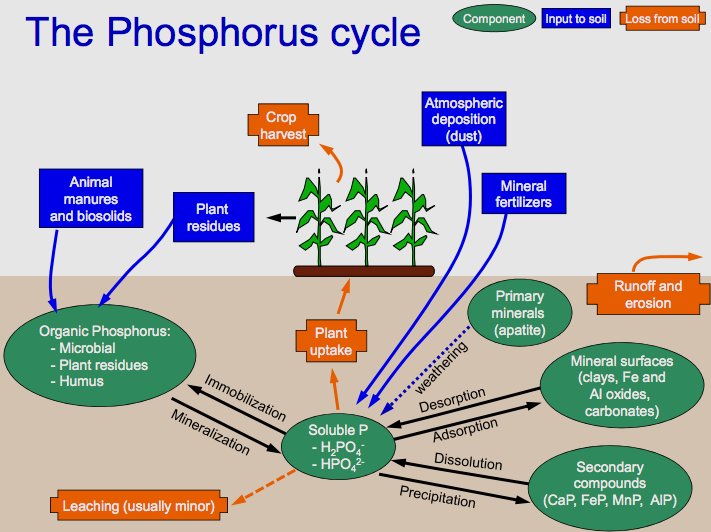 Adsorption is another process that reduces the available form of phosphorus in the soil. During adsorption, plant-available phosphorus binds with soil particles and become fixed. The opposite process of adsorption; desorption releases adsorbed P back to the soil solution.

The cycling of phosphorus through rocks and sediments is faster than the cycling of phosphorus through plants and animals. Organic P returns to the soil when plants and animals die and decompose. After that, these organic P transform into P in sediments and rocks when they retain in the soil or ocean for millions of years. The cycle starts and continues again when the phosphorus is released from the sediments and rocks thought the weathering process.

What are the Similarities Between Carbon Cycle and Phosphorus Cycle?

What is the Difference Between Carbon Cycle and Phosphorus Cycle? 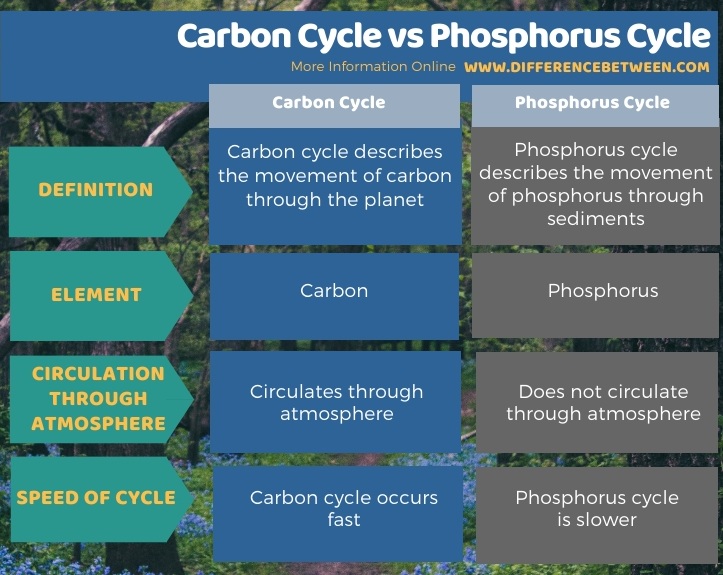 Difference Between Saline and Alkaline Soils

Difference Between Eutrophication and Algal Bloom 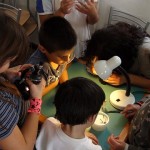 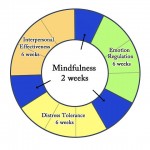