Deformation is the effect of change in the shape of a physical object when an external force is applied to the surface. The forces can be applied as normal, tangential or torques on the surface. If a body does not change its shape, even slightly due to external forces, the object is defined as a perfect solid object. Perfect solid bodies are not present in nature; every object has its own deformations. In this article, we are going to discuss what elastic deformation and plastic deformation are, how they are encountered in nature, and what are their applications.

When an exterior stress is applied to a solid body, the body tends to pull itself apart. This causes the distance between atoms in the lattice to increase. Each atom tries to pull its neighbor as close as possible. This causes a force trying to resist the deformation. This force is known as strain. If a graph of stress versus strain is plotted, the plot would be a linear one for some lower values of strain. This linear area is the zone in which the object is deformed elastically. Elastic deformation is always reversible. It is calculated using Hooke’s law. The Hooke’s law states that for the elastic range of the material, applied stress is equal to the product of the Young’s modulus and the strain of the material. The elastic deformation of a solid is a reversible process, when the applied stress is removed the solid returns to its original state.

Difference Between Propeller and Impeller 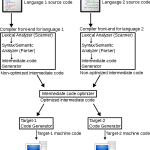