We can categorize isopropyl alcohol and rubbing alcohol under the alcohol group since they have a –OH group. These are the smaller alcohols in the series with two or three carbons. The OH group attaches to an sp3 hybridized carbon. Both are polar liquids and have the capability to form hydrogen bonds. Therefore, both have somewhat similar physical and chemical properties such as both are flammable and toxic liquids.

What is Isopropyl Alcohol?

Isopropyl alcohol is miscible with water and stable under normal conditions. Moreover, this is a colourless, clear, flammable liquid having a strong odour. Since this is a secondary alcohol, it undergoes all the reactions typical to a secondary alcohol. In addition, it oxidizes violently to produce acetone. This alcohol is useful as a solvent, in pharmaceuticals, household products, personal care products and to make other chemicals.

What is Rubbing Alcohol?

Rubbing alcohol is a type of denatured alcohol. It has 70-95% ethanol and some other additives. Therefore, it is highly poisonous and not suitable for consumption. It is mainly useful as a disinfectant on human skin.  It is also important in cleaning medical equipment so that they will be free from bacteria and fungi. Other than normal rubbing alcohol, there is another type called isopropyl rubbing alcohol, which consists mainly of isopropyl alcohol. We use it as a solvent or a cleaner.

Figure 02: A Bottle of Rubbing Alcohol

Denatured alcohol is ethanol with other additives, which makes it unfavourable for a drink. We name them as methylated spirits because earlier, the main additive for this was methanol which is about 10%. Other than methanol, people added other additives like isopropyl alcohol, acetone, methyl ethyl ketone, methyl isobutyl ketone, and denatonium to make denatured alcohol. Addition of these extra molecules doesn’t affect the chemical nature of the ethanol but makes it highly poisonous. Sometimes denatured alcohol may have a colour due to the addition of dyes. Since rubbing alcohol is also a type of denatured alcohol, it also shows the above properties and different colours. Moreover, the melting point of this alcohol varies according to the proportion of isopropyl alcohol present there; melting point ranges from 80 °C to 83 °C while boiling point ranges from −32 °C to −50 °C.

What is the Difference Between Isopropyl and Rubbing Alcohol?

The below infographic presents the difference between isopropyl and rubbing alcohol in tabular form. 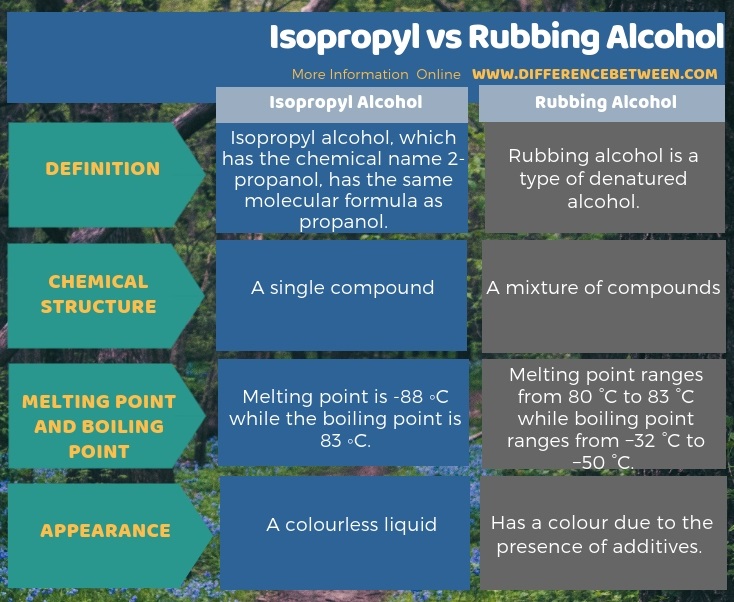 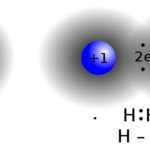