The key difference between linker and adaptor is that a linker does not have cohesive ends while an adaptor has one cohesive end.

DNA ligation is the process of joining two DNA molecules together, forming phosphodiester bonds. The enzyme called DNA ligase catalyzes this reaction. It is one of the critical steps in modern molecular biological fields such as recombinant DNA technology and DNA cloning. The ligation efficiency depends on the ends of DNA molecules to be ligated. There are two types of DNA ends as sticky ends and blunt ends. Ligation efficiency is high with sticky ends than with blunt ends. If the target DNA molecules have blunt ends, molecules called adaptors or linkers will be useful. Adaptors and linkers are chemically synthesized oligonucleotide molecules that help in DNA ligation. They have internal restriction sites as well. Adaptor has one sticky end and one blunt end, while linker has two blunt ends.

1. Overview and Key Difference
2. What is a Linker
3. What is an Adaptor
4. Similarities Between Linker and Adaptor
5. Side by Side Comparison – Linker vs Adaptor in Tabular Form
6. Summary

What is a Linker?

What is an Adaptor?

An Adaptor is a double-stranded oligonucleotide sequence used to link two DNA molecules together. It is a short sequence with one blunt end and one sticky or cohesive end. Therefore, it consists of a single-stranded tail at one end, which enhances the efficiency of DNA ligation. 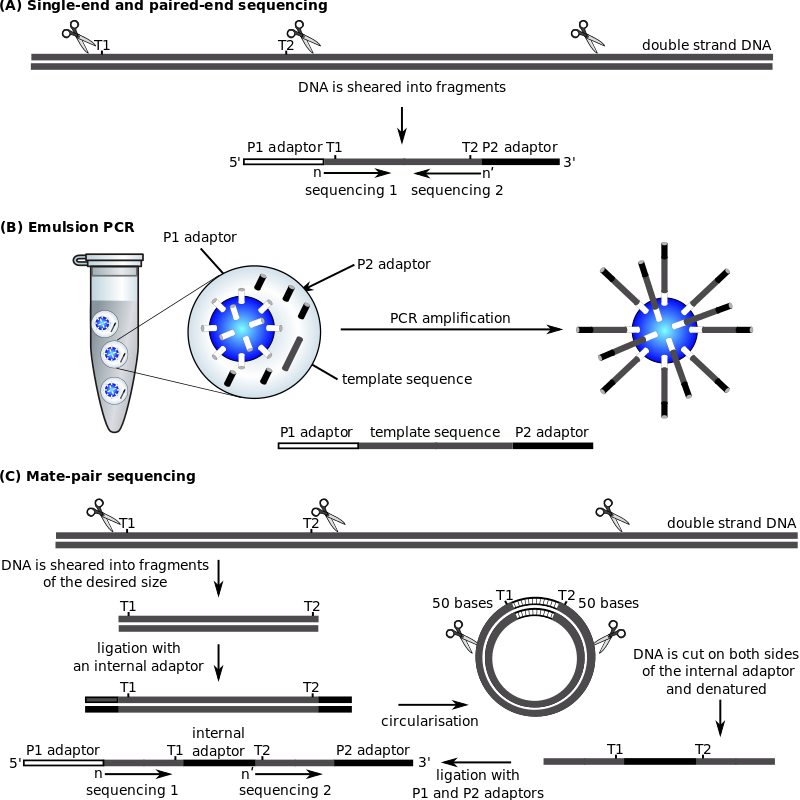 Figure 02: DNA Ligation by an Adaptor

Moreover, the adaptor has internal restriction sites. Therefore, after ligation, DNA can be restricted with appropriate restriction enzymes in order to create a new protruding terminus. One disadvantage of adaptors is that two adaptors can form dimmers by base pairing with themselves. This can be avoided by treating them with the enzyme called alkaline phosphatase.

What are the Similarities Between Linker and Adaptor?

What is the Difference Between Linker and Adaptor?

Below is a summary of the differences between linker and adaptor in tabular form. 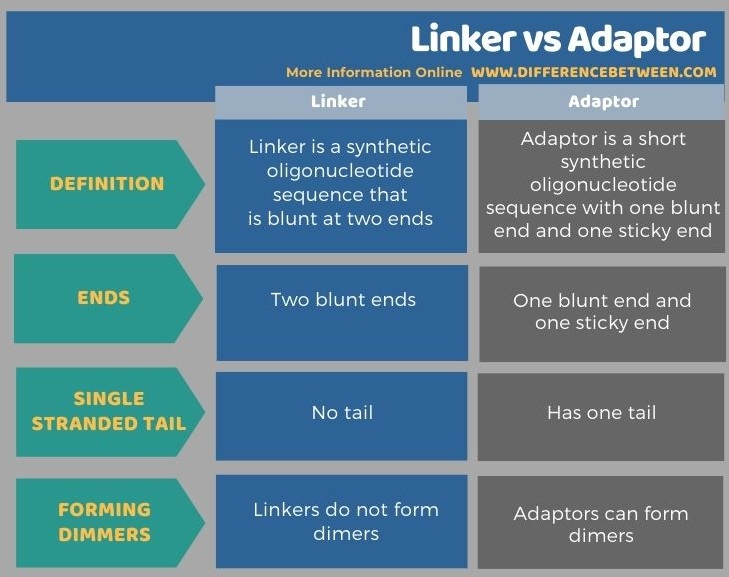 Linker and adaptor are two types of chemically synthesized oligonucleotides that are useful in ligating blunt-end DNA. Linker has two blunt ends, while adaptor has one blunt end and one cohesive end. So, this is the key difference between linker and adaptor. They are double-stranded molecules that have internal restriction sites.  They are widely used in recombinant DNA technology and DNA cloning.