In flowering plants, seed is defined as the mature ovule after fertilization. All seeds contain an embryo, which is a living plant. They also contain foods to nourish this living part in them. The seed cover basically helps to protect the embryo until it finds a proper location to germinate. The seed leaves (or cotyledons) provide the necessary energy to develop the embryo until the roots and true leaves are formed. The embryo in the seed does not germinate until it finds favorable conditions. For this reason, certain seeds have adapted to remain dormant for hundred years or more. Depending on the number of seed leaves, all the seeds can be categorized into two types; monocotyledonous (monocot) seeds and dicotyledonous (dicot) seeds. Seeds are also classified into two categories based on the presence or absence of a special food tissue called endosperm. They are albuminous and exalbuminous.

Monocot seeds have only one cotyledon, which is long and thin. The embryos of these seeds are generally oval- shaped, and the remaining large part is the endosperm, which is lined by a layer called ‘aleurone layer’. The endosperm is rich in starch and nourishes the embryo until it finds an appropriate place to germinate. Some examples of monocot seeds are maize, rice, wheat, coconut, grasses, etc.

Dicot seeds contain two cotyledon, which are thick and fleshy. The cotyledon is responsible for the absorption of nutrients from the endosperm before the germination of the seed. Some common examples of dicot seeds are pea, bean, peanut, apple, etc. Each dicot seed has a unique seed coat, which provides a distinctive appearance. Testa is the outer layer of seed coat, which protects the seed from damage and prevents it from drying out. Tegmen is the thin layer lying next to testa. Tegmen protects the inner part of the seed. Hilum is the area where the seed was attached to the ovary wall. Near the hilum, there is small pore, called micropyle, through which water enters into the seed. In addition, micropyle also allows diffusion of respiratory gasses during the germination.

What is the difference between Monocot and Dicot Seeds?

• Cotyledon of monocot seed is generally long and thin, whereas cotyledons of dicot seed are thick and fleshy.

• The embryos of dicot seed are large while that of monocot seeds are small.

1. Difference Between Monocot and Dicot Leaves

2. Difference Between Monocot and Dicot Roots

3. Difference Between Spore and Seed

4. Difference Between Fruit and Seed

Difference Between Progesterone and Estrogen 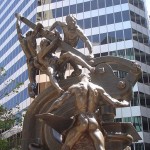