1. Overview and Key Difference
2. What is NBR
3. What is HNBR
4. Side by Side Comparison –NBR vs HNBR in Tabular Form
5. Summary

NBR or nitrile rubber is a copolymer of acrylonitrile and butadiene. It is a synthetic polymer material. The most common trade names of NBR are Perbunan, Nipol, Krynac, and Europrene. The term NBR stands for nitrile butadiene rubber. This material comes under the family of unsaturated copolymers of 2-propenenitrile. Generally, this polymer material is highly resistant to oil, fuel and many other chemicals.

When considering the production of NBR, the reaction mixture requires an emulsifier, 2-propenenitrile, butadiene monomer, radical generating activators, and a catalyst. The reaction medium for this particular reaction is water. The temperature used in this production process is nearly room temperature or slightly above. This reaction facilitates polymerization and branch formation in the polymer material.

In its raw state, NBR has a yellow colour. Sometimes, it can appear in orange, or as a red-tinted material. Usually, this material shows an excellent resistance towards mineral oil, vegetable oil, benzene, petrol, dilute acids and alkaline solvents. More importantly, the ratio of acrylonitrile groups to butadiene groups in the polymer backbone, referred to as the ACN content, is important in determining the glass transition temperature of this material. 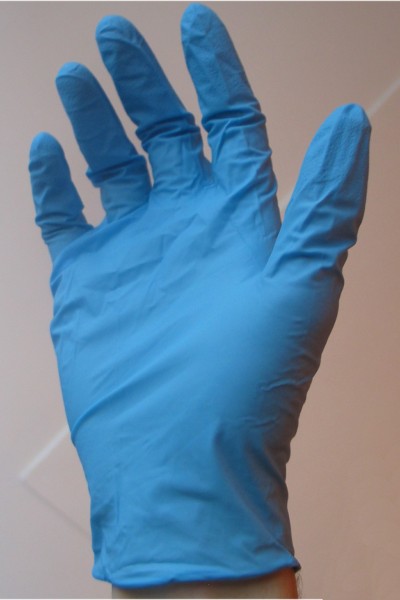 Figure 01: A Disposable Glove Made of NBR

The term HNBR stands for hydrogenated nitrile butadiene rubber. It is hence the hydrogenated form of nitrile rubber. This material is also known as highly saturated nitrile, considering the chemical composition of the polymer material. This material is very important due to its favourable properties such as high strength, retention of properties upon exposure to heat, oil, and chemicals.

There are many applications of HNBR. This material is used over NBR due to its high strength. For example, this HNBR material is mainly used in automotive, industrial, and assorted, performance-demanding applications. Most commonly, HNBR is used to manufacture O-rings for automotive air-conditioning systems.

What is the Difference Between NBR and HNBR?

Below infographic shows more comparisons related to the difference between NBR and HNBR. 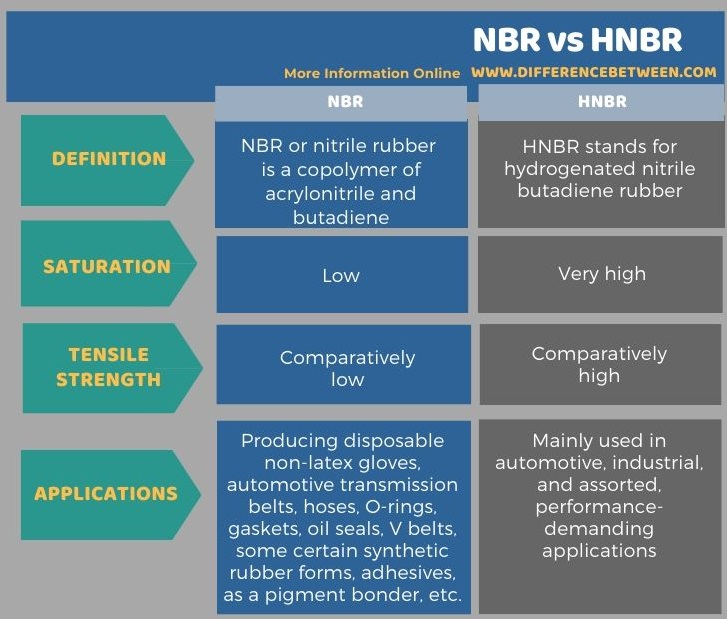 Difference Between Polyolefin and Polyethylene

Difference Between Silane and Siloxane

Difference Between Polypeptides and Polyamides

Difference Between Crosslinking and Gelation 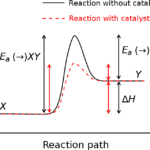