The key difference between plasmid and cosmid is that the plasmid is a double-stranded, circular and closed extra-chromosomal DNA present in bacteria and archaea while the cosmid is a hybrid vector system formed due to combining of the cos sequence of lambda phage and plasmid DNA of bacteria.

Genetic engineering is an advanced study under Biotechnology. Genetic engineering technique can change or alter the genome of living organisms. Furthermore, genetic engineering is helpful in gene therapy and treating genetic disorders. Before inserting genes into another organism’s genome, it is necessary to make a recombinant DNA molecule that can carry the desired DNA fragment and deliver into the host organism. Therefore, during the recombinant DNA technology, it is done by a vector system. Hence, a vector works as a vehicle or a mediator between donor and host organism. Plasmid and cosmid are two types of vectors commonly use in recombinant DNA technology and genetic engineering. Some are natural vectors while some are artificial vectors. The plasmid is a natural vector while cosmid is an artificially constructed vector. Both types have pros and cons.

1. Overview and Key Difference
2. What is Plasmid
3. What is Cosmid
4. Similarities Between Plasmid and Cosmid
5. Side by Side Comparison – Plasmid vs Cosmid in Tabular Form
6. Summary

The plasmid is a small, circular, double-stranded DNA present in prokaryotic organisms mainly in bacteria and archaea. They exist as closed circles inside the bacteria. Also, plasmids are not genomic DNA. Hence, the presence or absence of plasmids in prokaryotic cells does not affect the survival of those cells. Plasmids are extrachromosomal DNA. However, plasmids provide additional advantages to bacteria and archaea. They contain special genes such as antibiotic resistance, resistance to various heavy metals, macromolecule degradation etc.

Furthermore, plasmids are capable of self-replication without linking with the chromosomes. It carries genes or the information that is necessary for its own replication and maintenance. Moreover, they are independent DNA. Due to these special features, plasmids have immense use in Molecular Biology as vectors.

The double-stranded nature of the DNA, antibiotic resistance genes, self-replicating ability and special restriction sites are the important characteristics which make plasmids more suitable as vector molecules in recombinant DNA technology. And also plasmids are easy to isolate and transform into host bacteria.

Cosmid is a hybrid vector system. It is an artificial vector constructed by combining the cos sequences of Lambda phage particles and a plasmid. These cos sites or sequences are long DNA fragments that comprise of 200 base pairs. They have cohesive or sticky ends that allow the plasmid to fit into the viral DNA. Therefore, the cos sites are vital for packaging of the DNA. There are three cos sites namely cosN site, cosB site and cosQ site. These sites involve in nicking the DNA strand by terminase activity, in holding the terminase and in preventing the degradation of the DNA by DNases respectively. 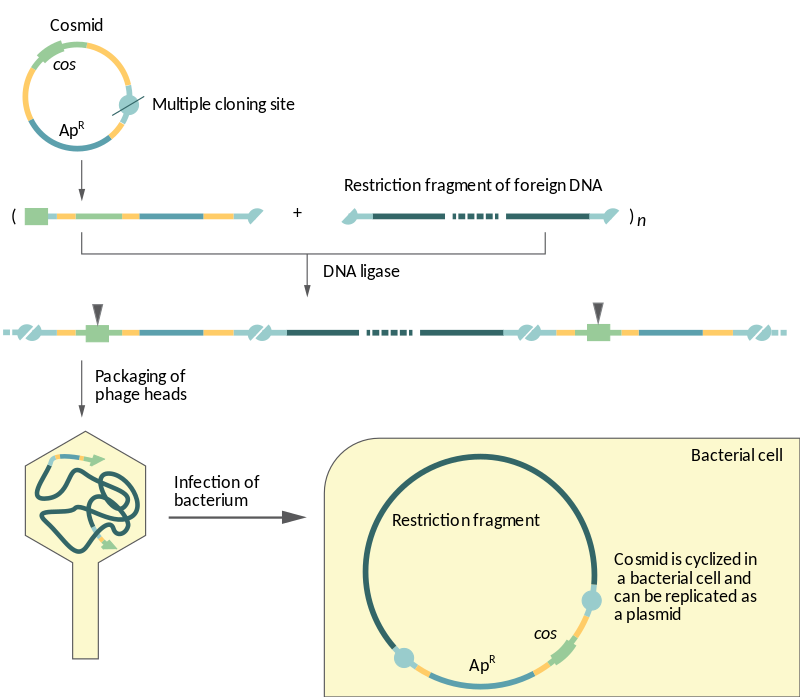 Cosmids can either replicate single-stranded DNA or double-stranded DNA using a suitable origin of replication. They also contain antibiotic resistance genes that can be useful as markers in selecting transformed cells. Thus, similar to plasmids, cosmids are also good vectors in recombinant DNA technology.

What are the Similarities Between Plasmid and Cosmid?

What is the Difference Between Plasmid and Cosmid?

Plasmid and cosmid are two types of cloning vectors used in genetic engineering. Plasmids are small, circular double-stranded extrachromosomal DNA molecules present in bacteria and archaea. On the other hand, cosmid is a hybrid vector constructed from cos sequences of lambda phage DNA and plasmid DNA. This is the key difference between plasmid and cosmid. Furthermore, plasmids can bear up to 25 kb of DNA fragments while comsids are able to contain up to 45 kb fragments. Thus, this is another difference between plasmid and cosmid.

More details are given in the infographic of the difference between plasmid and cosmid. 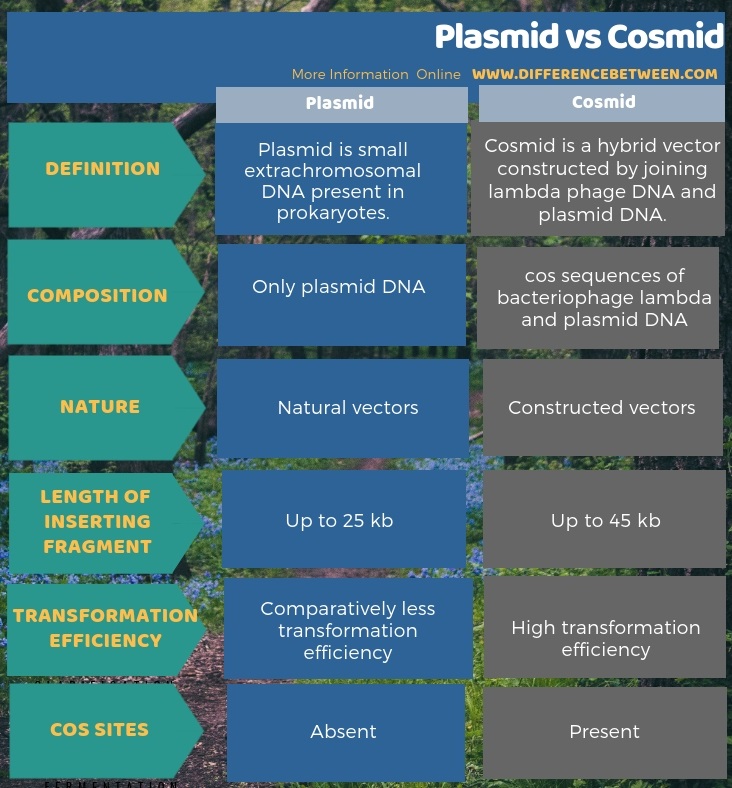 The plasmid is a naturally occurring extrachromosomal DNA while cosmid is a hybrid vector of phage DNA and plasmid DNA. Both are cloning vectors used in recombinant DNA technology. Cosmids contain special sticky ends known as cos sites required for in vitro packaging. On the other hand, plasmids contain several features that make them ideal vectors in genetic engineering. Both can undergo independent replication or in vitro packaging to bacterial cells. Plasmids are able to contain a foreign DNA fragment of 25 kb length while cosmids are able to contain a foreign DNA fragment of 45 kb. Hence, cosmids are useful in cloning purposes to clone larger fragments of DNA since plasmid vectors can not clone larger fragments. Thus, this summarizes the difference between plasmid and cosmid.