A turbojet is an air breathing gas turbine engine executing an internal combustion cycle during the operation. It also belongs to the reaction engine type of the aircraft propulsion engines. Sir Frank Whittle of United Kingdom and Hans von Ohain of Germany independently developed the practical engines concept during the late 1930s, but only after the WWII, the jet engine became a widely used propulsion method.

Turboprop engines are another variant built on the turbojet engine, and use the turbine to produce shaft work to drive a propeller. They are a hybrid of early reciprocating engine propulsion and newer gas turbine powered propulsion. Also, turboprop engines can be seen as a turboshaft engine with propeller connected to the shaft through a reduction gear mechanism.

Cold air entering through the intake is compressed to high pressure in the successive stages of an axial flow compressor. In a common jet engine, air flow undergoes several compression stages, and at each stage, raising the pressure to a higher level. Modern turbojet engines can produce pressure ratios as high as 10:1 due to advanced compressor stages designed with aerodynamic improvements and variable compressor geometry to produce optimal compression at each stage.

The pressurization of the air also increases the temperature, and when mixed with the fuel produces a combustible gas mixture. Combustion of this gas increases the pressure and temperature to a very high level (1200 oC and 1000 kPa) and the gas pushes through the blades of the turbine. In the turbine section, gas exerts force on the turbine blades and rotates the turbine shaft; in a common jet engine, this shaft work drives the compressor of the engine.

Then the gas is directed through a nozzle, and this produce a large amount of thrust, which can be used to power an aircraft. At the exhaust, the speed of the gas can be well above the speed of sound. The operation of the Jet engine is ideally modeled by the Brayton cycle.

The turbojets are inefficient at low speed flight, and optimal performance lies beyond Mach 2. Another disadvantage of the turbojets is that the turbojets are extremely noisy. However, they are still used in the mid-range cruise missiles because of the simplicity of production and low speed

Turboprop engine is an advanced version of the turbojet engine, where the shaft work is used to drive a propeller through a reduction gear mechanism attached to the turbine shaft. In this form of jet engines, majority thrust is generated by the propeller reaction and the exhaust generates a negligible amount of usable energy; hence mostly not used for thrust. 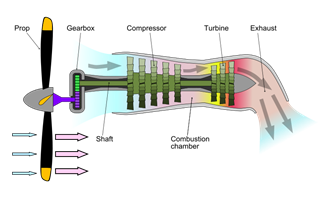 The propellers in turboprop engines are usually a constant speed (variable pitch) type, similar to propellers used in larger reciprocating aircraft engines. While most modern turbojet and turbofan engines use axial-flow compressors, turboprop engines usually contain at least one stage of centrifugal compression.

Propellers lose efficiency as aircraft speed increases, but very efficient at flight speeds below 725 km/h. Hence turboprops are normally not used on high-speed aircraft and are used to power small subsonic aircraft. Some exceptions exist, such as Airbus A400M and Lockheed Martin C130, which are large military freighters, and turboprops are used for high-performance short-takeoff and landing requirements of these aircrafts.

What is the difference between Turbojet and Turboprop Engine?

• Turbojets were the first air breathing gas turbine engine for aircraft, while turboprop is an advanced variant of turbojet, using the gas turbine to drive a propeller to generate thrust.

• Turbojets are used in specific military applications at present, but turboprops are widely used in both military and commercial aircraft.

Difference Between Turbojet and Turbofan

Difference between Jig and Fixture

Difference Between Fan and Blower 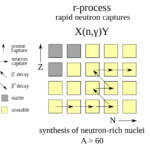