As religion plays an important role in the life of an individual and the believe in the existence of God is always been a topic of debate, understanding the difference between religion and atheist would be of interest to many. At the birth of the human race, there was no such thing as religion. However, as man evolved he began to create the idea of religion. As a result, in the present world there are a number of religions. With religion, evolved the idea or concept of atheism. According to the Oxford dictionary, disbelief or lack of belief in the existence of God or gods is known as atheism. A person who practices this principle is known as an atheist. Religion is all about beliefs and faiths. Therefore, technically speaking, Atheism is also a religion.

What does Religion mean?

Religion deals with practices and attitudes followed by a particular sect of people. Not all religions believe in the concept or the existence of God. Buddhism and Jainism for that matter do not put forward strong belief in God. Religion is quite the opposite of atheism in character as a religion has a set of practices that need to be followed. Religion, on the contrary to atheism, accepts supernatural deities. They would say that there is proof regarding the existence of supernatural Gods and Goddesses. They would go to the extent of citing examples from the lives of religious leaders.

What does Atheist mean?

An Atheist is the one who does not believe in the existence of God or gods. An atheist does not believe in supernatural gods. A non-believer in God need not follow practices. Atheists need not abide by any kind of devotion to anything. In spite of his disbelief in faiths and religious practices, an atheist can lead a great life laden with reason and moral principles. It should be remembered that many social movements were led by the atheists in the past. Atheists lean more towards skepticism regarding supernatural forces. They would say that there is no concrete evidence in support of the existence of supernatural deities.

What is the difference between Religion and Atheist?

Thus, the key difference between religion and atheism is that the religion is more to do with God and practices whereas Atheism consists in the non-acceptance of God. 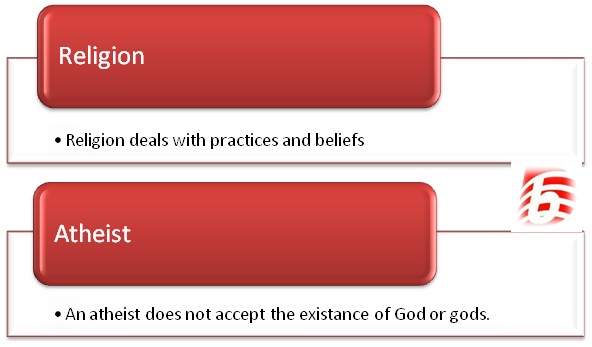 The difference between religion and atheist:

• Religion deals with practices and beliefs whereas atheism deals with the non-acceptance of the existence of God. 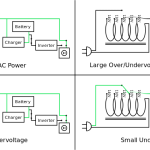 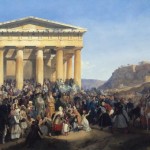