Every society and culture has a set of rituals and traditions that make it different from others. These are unwritten laws and norms pertaining to behavior and action when interacting with others in the society. These rituals and traditions also pertain to events and ceremonies that are followed in that society, particularly in relation with religion. There are many similarities between ritual and tradition confusing people. This article attempts to highlight the subtle differences between ritual and tradition to remove doubts in the minds of readers.

In every society, important functions, events, ceremonies, festivals etc. are marked by certain acts or a series of acts that are perceived to have a symbolic value. Rituals are observed almost religiously because, in most cases, they have a religious backing and, therefore, considered important for individuals in the society. It is the presence of rituals that make an event formal and traditional.

In Hindu religion, a young boy has to undergo a ritual called yagyopavit sanskar (also called Janeu sanskar in some parts of India) where his head is shaven, and he is made to wear a string across his shoulder, both acts having symbolic values. This is somewhat similar to baptism for Christians that marks the initiation into Christianity of an individual.

A tradition is an act, behavior, or a belief system that is handed down from one generation to another in a society or culture and which has a special significance for the members of the society. Traditions were mostly passed down in the form of folklore or stories for the future generations to remember and learn the moral from it. The concepts of unity, compassion, friendship, valor, loyalty etc. are traditions that have passed down from one generation to another.

Traditions have helped in binding a society together serving as a fabric running across the social spectrum. Traditions help individuals in a society to know how to act and behave when interacting with others. It was the definition put forward by Edward Shils in his book “Traditions” that tradition is anything that is handed down by the past to the present that has become a universally accepted definition of this concept.

What is the difference between Ritual and Tradition?

• Tradition is a generic term that encompasses a wide variety of things and concepts that are handed down by one generation to another.

• Ritual is an act or a series of acts that are performed or observed in a society on occasions, events, festivals, and ceremonies. These rituals have a symbolic value and also have a religious basis.

• So a handshake to greet others is a ritual, while the practice to honor and respect the seniors is a tradition.

1. Difference Between Rituals and Ceremonies

2. Difference Between Religious and Secular Rituals

3. Difference Between Customs and Traditions

4. Difference Between Culture and Tradition

Difference Between Culture and Tradition 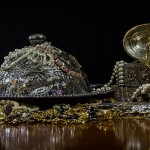