Rum and whiskey are two of the many alcoholic beverages that are consumed by people all over the world. Alcoholic beverages are considered social drinks that help in breaking the ice between people as they shed inhibitions, letting loose in ceremonies and celebrations. In fact, important meetings and celebrations are said to be incomplete without guests being offered one or the other alcoholic drink. There are lovers and devotees of both rum and whiskey with these drinks being different in the manner in which they are prepared, ingredients, color, flavor, and even the taste and the effect they have on people. Let us take a closer look.

Rum is an alcoholic beverage that is very popular all over the world and evokes images of Caribbean people and their culture. Rum is produced from sugarcane and its byproducts such as molasses utilizing processes of distillation and fermentation. Latin America and the Caribbean Islands happen to be the biggest producers of this alcoholic beverage that is available as both light and dark rum.

As described earlier, rum is made mostly with molasses though in some parts of the world, notably France; rum is made with sugarcane juices directly. Yeast is added to molasses to start fermentation at a controlled pace and manner to have a taste and flavor that is liked by the people. Fermentation and distillation later on result in an alcoholic beverage that has to be aged and blended to suit the tastes of the people.

Whisky is an alcoholic beverage that is perhaps the most popular among alcoholic drinks. It is made from several grain types such as malt, barley, and even wheat and rye. Whisky originated in Scotland and this beverage coming out of Scotland is called Scotch whisky or simply Scotch. While whisky can be made with malt or with barley, there are blends of both types with their being single malt, blended malt, and finally blended whiskies that are made by mixing of several grain and malt whiskies. It all starts with the germination of barley by steeping it into water but only up to a stage so that the grains that produce do not start to eat the sugar present in the barley. To prevent this from happening, barley is heated, and peat is also mixed to start a process called malting. It then becomes ready for mashing. Mashing converts the starch in barley into sugar that is later fermented to become alcohol. Finally, the product is distilled and aged in wooden casks, to let it develop the magical flavor for which whisky is so very popular.

What is the difference between Rum and Whiskey?

• Rum is sweeter in taste than whiskey.

• Whisky is golden in color whereas rum is available as light, dark, and golden variations.

• Rum originated in West Indies where it was made by the slaves working in sugar plantations. On the other hand, whiskey originated in Ireland but got popular when made in Scotland. To this date, whisky coming out of Scotland is called Scotch whisky or just Scotch.

Difference Between Brandy and Whiskey

Difference Between Dark and White Rum 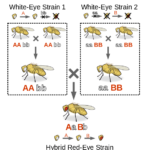